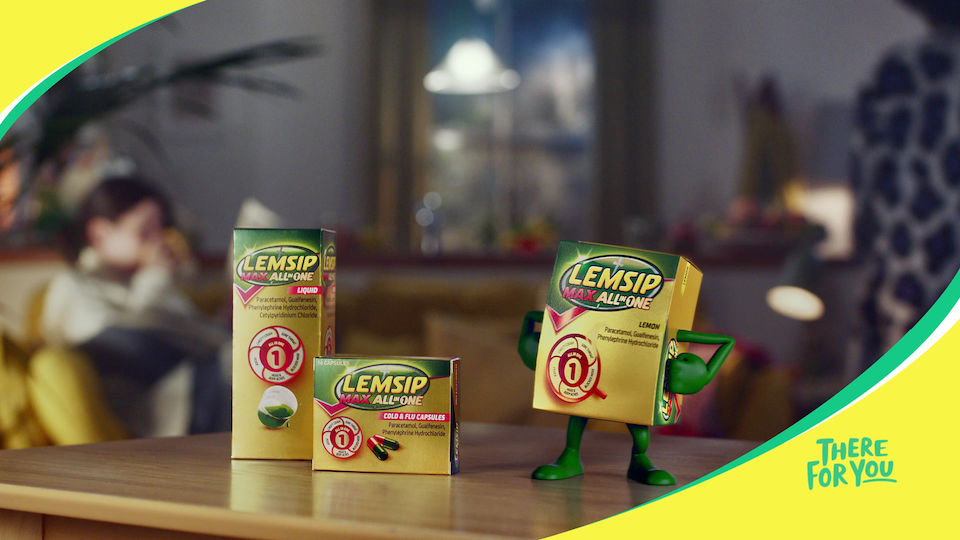 Reckitt Benckiser’s cold and flu remedy product, Lemsip, boasts friendlier exterior in new ad as he takes on the role of caregiver.

Lemsip has returned to screens just in time for cold and flu season with a new 30″ spot ‘There For You’ featuring CG character animation. The TVC was directed by RSA’s This Is Felo with character design and VFX a collaboration between Big Buoy and Smoke & Mirrors. The spot, by Havas London, reveals the evolution of Lemsip’s character comparative against previous campaigns, as we witness a less mechanical, more affectionate and doting humanised protagonist.

A pocket-parent with a huge heart, Lemsip follows our poorly female heroine as she goes about her day-to-day life, making it all better with little tricks here and there. A hyperealistic recreation of his previous embodiment, we watch as his magical powers provide tissues in a heartbeat, turn off flickering office light bulbs and terminate background hums of noisy roadworks, allowing our female cast member to feel at ease.

Speaking on the creation of Lemsip’s new character interpretation, Smoke & Mirrors’ Lead Character Designer and Animator, Willie Torres, comments, “The Lemsip character has previously been interpreted as a slightly more mechanical personification. Being asked to redesign the character was a huge privilege and an opportunity not to be missed. It was clear from the beginning that the creatives at Havas wanted a change and they were looking for a character that could carry the new brand message, ‘There For You’. To achieve this, the goal was to make the new character kinder and more helpful. We worked closely with the Havas team through an extensive creative process with dozens of drawings and possibilities to reach the finished result.”

Post-production Producer on the project, Jenna Le Noury, adds, “There was a tight turnaround as we were producing both Lemlift and Lemsip back-to-back. We’re all really happy with the end result which I feel was only achievable due to the seamless union between the teams at Havas, RSA and ourselves. It was great fun to be involved with this campaign.”